Cryptolocker – Can I Recover My Files?

Can Cryptolocker Victims Recover Their Files?

So you’re happily working on your Windows computer, getting stuff done. Little do you know, your personal files are rapidly being encrypted so that you can’t access them.

Suddenly, an alert appears on the screen—you have 96 hours (or four days) to pay $300 or lose all your encrypted personal files forever. A countdown is already ticking on your screen. 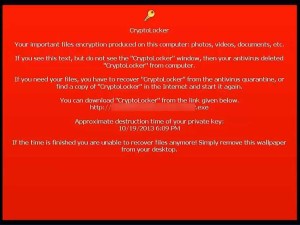 This is CryptoLocker, the latest and most damaging Windows virus in a series of recent ransomware Trojans. The relatively large amount of money it demands, combined with the tight deadline, make it far more aggressive than other similar viruses.

And unfortunately for us, it’s spreading more rapidly than any of its contemporaries.

You’d think it would be simple to track down the perpetrators given that they’re taking a ransom, but it’s not that simple. Since CryptoLocker demands payment through MoneyPak or Bitcoin, both of which harness private, decentralized fund-exchange networks, it’s much more difficult to follow the money.

Until the good guys are able to track down the bad, the best thing you can do is stay informed. Says Corey Nachreiner, director of security strategy at Watchguard Security, about what you need to know.

Nachreiner said that CryptoLocker is especially dangerous because of its infection rate. “I can tell you anecdotally, we’ve seen many client and customer queries for it,” he said. “I haven’t seen this amount of customer based questions in quite a long time.”

According to the US Computer Emergency Readiness Team, it spreads through an email that appears to be a tracking notification from UPS or FedEx, though some victims said they got infected on the tail end of wiping out a previous botnet infection. And in case it wasn’t clear, you don’t need to be in the US to become infected.

Nachreiner said that it’s more than opening the email that spreads the virus. You need to open the email and actually download the zip file inside it. Hiding inside that zip file is a double-extension file such as *.pdf.exe. The .exe file lets CryptoLocker run on your computer, while the innocuous .pdf extension hides the file’s true function.

While it’s hard to imagine savvy computer users falling for such a ploy, Nachreiner said this time of year makes us all more fallible. There’s a reason CryptoLocker first surfaced in September 2013, and not earlier in the year.

“This lure is far more common for the holiday shopping season,” he said. “As people are doing more shopping online, they’ll be more likely not to suspect emails about packages. My guess is we’ll also see CryptoLocker mimicking emails from Amazon and other shopping sites, too.”

So what should you do? Run your antivirus software, though Nachreiner warns that it’s “not a silver bullet.” Make sure you keep regular and recent backups of all your files. This goes double if you’re a business that shares a drive or folder across multiple computers, since CryptoLocker is known to target shared files for encryption first.

Some good Samaritans have also developed free tools that shut down CryptoLocker before it starts. One is called Crypto Prevent, and it stops your computer from downloading double-extension files.

It’s all well and good to prepare, but what if you already are infected? Despite the virus’s warning not to “disconnect from the Internet or turn off the computer,” this is exactly the first order of damage control.

“You’ve got to realize these guys are criminals and they lie,” said Nachreiner. “The only thing turning off your computer does is keep the virus from continuing to infect.”

In fact, unplugging your computer may save some of your files, if the virus is still in the process of infecting them.

Next, you need to figure out what damage has been done. Which files have you lost? Do you have backups of these files? If you don’t have backups, have you checked Windows’ System Restore files, which sometimes automatically back up the computer for you?

If you can help it, Nachreiner highly recommends not giving in to extortion.

“You should never pay these guys ransom,” he said. “It’s just going to encourage malware authors to create similar viruses.”

If you do have a backup, it’s time to wipe your computer of the virus. Fortunately for you, said Nachreiner, just about every antivirus vendor has a CryptoLocker cleanup tool. Work with your regular antivirus software, or follow a tutorial.

Restore your backup, and you should be set. Just don’t click on any more dodgy emails.

One Response to Cryptolocker – Can I Recover My Files?